Fluid dynamics simulation: the competitive advantages of Castle by PiQ2 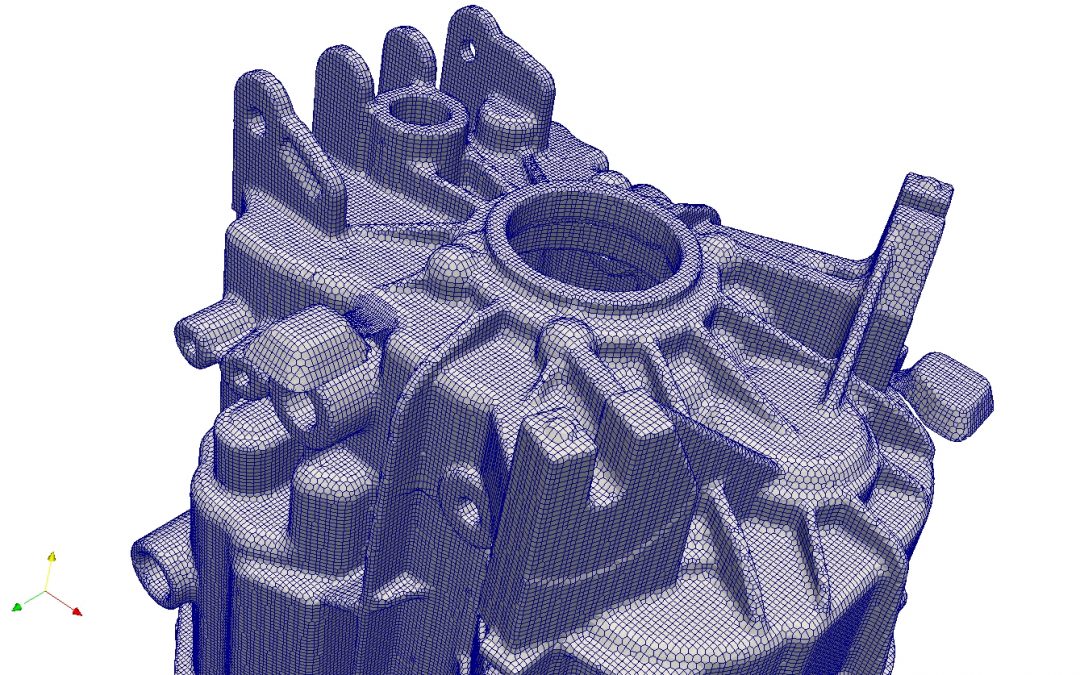 As already dealt with in the post Die Casting Simulation Software: PiQ2’s Castle, Castle is a software developed by PiQ2 expressly for the design and the fluid dynamics simulation of cold and hot chamber die casting moulds. The software’s specialization on only one productive process (i.e. the die casting process) has made it possible to implement some features enabling the program to provide the user with extremely true-to-life simulations. In particular, PiQ2 has secured a competitive advantage over the solutions offered by the majority of competitors thanks to two features: the hybrid mesh and the dual-phase simulation.

In this post we will go into some technical details of the two features, examining how and why they turn out to be competitive advantages in the die casting mould design and the fluid dynamics simulation of their filling.

Definition and kinds of meshes for fluid dynamics simulation

A mesh is “a collection of vertices, edges and faces that defines the shape of a polyhedral object”. In computer graphics, meshes are used to replicate and represent an object’s forms in space and they can be of different kinds according to the form, dimensions and the different configuration of the elements they are composed of.

More specifically, in the field of die casting mould design and fluid dynamics simulation, meshes are used to study and evaluate the forms of components, moulds and feed, unloading, lubrication and cooling flows. For this reason, the form of the mesh and its capability to represent an object’s geometry in detail is crucial to provide the user with accurate and true-to-life renderings.

However, the need for detail and accuracy – which characterizes design – clashes with the complexity of the elaborations to be carried out: a highly complex mesh entails proportionally higher elaboration times. For this reason, the simulation of filling flows and the die casting mould design require reaching a compromise among the accuracy level of the graphic representation, computation time and the use of processors.

Through its suite Castle, PiQ2 has thus chosen a solution that optimizes this tradeoff: the hybrid mesh.

The hybrid mesh by PiQ2

It is exactly the quest for a compromise between the need for detail and calculating times that have led PiQ2 to the elaboration technology based on hybrid mesh. PiQ2’s hybrid mesh allows to increase the fineness of the mesh only in the points where it is necessary to make more accurate and detailed assessments.

Thus, unlike its competitors, PiQ2 provides the designers with structured prismatic internal meshes, unstructured superficial meshes, coarse meshes for hollow sections and fine meshes for thin and near-to-the-surface sections. In this way, thanks to the presence of different meshes with different refinement levels, it is possible to arbitrarily choose the zones in which a high level of detail is to be obtained. Moreover, PiQ2’s hybrid mesh allows its users to define a zone-specific refinement level, so as to reduce processing times and analyze in detail only the zones that require it. This is a second very interesting feature implying a significant technological progress which gives Castle a competitive advantage over its competitors.

Still on the subject of processing times and the speed with which simulation results can be obtained, it should be noted that PiQ2’s Castle is a multiprocessor software whose calculation can be freely distributed to the desired number of processors. Thus, unlike its competition, PiQ2 does not discriminate between single-processor and multi-processor licenses and gives its clients the freedom to choose the number of processors to be used for the calculation without free of charge: a competitive advantage that results in freedom for the client.

As mentioned in the opening of this post, there are two innovative features allowing PiQ2 to stand out from the competition: the hybrid mesh and the dual-phase simulation. Having analyzed the hybrid mesh, we will now move on and examine the features of the dual-phase technology and how it allows PiQ2 to secure a further competitive advantage over the solutions for mould fluid dynamics simulation offered by competitors.

Dual-phase simulation is an innovative technology proposed by PiQ2 and it was optimized expressly for the fluid dynamics simulation in the hot-chamber and cold-chamber die casting process and it makes it possible to determine the behavior both metal and air that were injected into the mould. Traditional simulation software could be defined as “single-phase”: as a matter of fact, they do not consider air as a real fluid and only take into consideration mould filling by metal.

In mould filling simulation, the mesh cells of this software can be either filled with metal or empty. This kind of simulation cannot therefore take into account all phenomena occurring during the die casting process and associated with air behavior inside the mould. Simulations that do not consider air cannot thus simulate the effect of metal spraying caused by speed and the fluid’s impact with air, the cooling of metal alloys caused by the collision between air and the metal’s liquid front, and effects of vacuum and air vents.

Without these aspects being taken into account, it is very difficult to carry out accurate simulations and, above all, to study and investigate the appearance of defects due to air behavior inside the mould, such as bubbles, cavitations and shrinkage porosities from gas.

As mentioned above, instead, Castle’s dual-phase simulation makes it possible to consider the air inside the mould as a fluid behaving according to the laws of fluid dynamics and thermodynamics exactly as metal. In this way, fluid dynamics simulation reflects the die casting process more accurately and makes it possible to evaluate and take into account a series of phenomena that are not usually considered by simulation software.

A single hybrid mesh cell can thus be filled with metal, air or an emulsion composed of both materials: in this way, it is possible to take into account the ways in which air is emulsified, compressed, transported and dispersed by the metal flow it comes into contact with.

Thanks to dual-phase simulation it is thus possible to analyze metal spraying phenomena in the very moment of the metal’s injection into the mould, the presence of droplets, small air bubbles and the behavior of the molten metal front in the moment of its impact with air. Castle’s dual-phase simulation is highly accurate: the resolution of air entrapment is virtually infinite – even 0.1% of porosities can be detected, which implies that the system can predict even the smallest porosity zones.

Taking into account all of these aspects in the fluid dynamics simulation of the die casting process is crucial, since air is one of the main factors determining the appearance of defects in die-casts.

In this post we have dealt with two relevant competitive advantages allowing the Castle fluid dynamics simulation by PiQ2 to stand out from those offered by most of the software on the market. More specifically, we have analyzed two features linked with CastleBODY, Castle’s module expressly devoted to mould filling simulation.

For an overview of the other modules’ features, please consider reading our post Die Casting Moulds: How To Optimize Tools and Processes. Please do not hesitate to contact us for further information by filling in the form.