Just as it happened in the plastic industry several years ago, thanks to the newest breakthrough in technological developments achieved by the German company Ferrofacta, the Hot Runner Injection System is ready to change the world of zamak die-casting. Up today, the company is the first and only to market a Hot Runner injection system.

We had the chance to interview Mr Calvin Higginbottom from Ferrofacta and Eng. Andrea Panvini from PiQ2 to better comprehend the industry’s opportunities and how simulation software can assist to develop and optimize this new technology.

What are the benefits of the Hot Runner Injection System

The Hot Runner system completely revolutionises the zamak die-casting process. The benefits it brings with itself are countless. Here you find some of the most significant advantages you can count on adopting this system:

Flexibility of the nozzles

Unlike in conventional die casting, where designers have almost obliged positions to put the sliders, the runners and the gates, the Hot Runner nozzle allows higher flexibility and freedom of configuration. That makes the part and mold design process much quicker and simpler, saving time, money and effort since the design phase.

A further benefit, as software simulations can show, is that casting with direct gating or very short runners leads to better parts than conventional die casting, where a sprue and a runner feed the part. That is because there is less air going into the part. The only air to consider is the one already present in the cavity, which finely disperses when the part is made.
The only simulation software capable to provide significant support in managing the entrapped air problem is PiQ2’s CastleBODY, which, thanks to its Dual-Phase technology, predicts the flow and behaviour of the air in the runners and cavity.

Furthermore, the flexibility and modularity of the nozzles technology also allow increasing their number to feed multiple parts. With the Hot Runner Injection System, you can use up to 12 nozzles taking advantage of the die casting machine locking force and plate size without wasting it to room runners. As a matter of fact, with this injection system, foundries can halve the production cycle and increase the amount produced at the same time. Nowadays, there are already foundries producing 20,000 parts an hour.

Thanks to its indirect gating system, Hot Runner Injection System brings the alloy directly to the cavity, reducing the temperature loss in the runners to a minimum. That allows the zinc to flow smoothly, which results in a better surface finish and higher integrity of the part.

With the conventional system, you have to consider at least 20-30% of waste material to be remelted, which also contributes to higher energy consumption. The Hot Runner Injection system allows producing the finished part, thus minimising scrap, permitting the foundry to save on cash flow and energy costs because there is no need to buy and remelt the waste material anymore.

Hot Runner is a true innovation in zamak die casting. And as for any groundbreaking innovation, the know-how has to be built from scratch. That also regards the simulation activity.
PiQ2 closely follows the evolution of the technology and carries out several simulations with Castle software to better understand the peculiarities of this innovative injection system. The desire is to provide the customers with an up-to-date software for the Hot Runner Injection System, thus allowing a better understanding of the application of this new technology and obtaining the best possible results.
There are, in fact, significant differences compared to the conventional die-casting simulations, which need to be addressed with dedicated solutions.

A key feature of Hot Runner Simulation is the annular injection point, whereas the traditional casting uses disk-shaped inlet points. The thickness of this annular injection point is only a few tenths of millimetres, where the metal passes at extremely high velocities and enters directly into the cavity. The challenge is that such a small injection point requires a very high degree of accuracy of the mesh in the surrounding area. Furthermore, the behaviour of the flow at the entry point influences the cavity filling pattern: even the smaller detail, i.e. the edge radius, can dramatically change the flow. In fact, the first simulations immediately highlighted the necessity to address these characteristics of the Hot Runner system by modifying some core parameters of the simulation.

Air in the cavity

Another challenge is the simulation of what happens to the air inside the cavity.
In the case of conventional injection simulation, the software starts with the flawed premise that there the metal is already at the nozzle without considering the presence of air entering the cavity before the metal, while CastleBODY takes this situation into account. This problem doesn’t exist with Hot Runner since the nozzle is placed directly on (or very close) the part and the runner is significantly shorter or inexistent. Therefore much less air enters the cavity, but in full acceleration and at a much higher speed, making the simulation behaviour critical.
A further significant difference with traditional hot chamber HPDC, is thus the velocity injection profile to be simulated since, at the beginning of filling, the liquid metal is already at the inlet point. In contrast, in traditional technology, it comes with a fully developed speed.
In fact, simulations that PiQ2 carried out on the Hot Runner showed areas of possible improvements that will be implemented in the new version of Castle suite software for both the conventional die casting simulation as well as for the Hot Runner with dedicated modules for this innovative system. 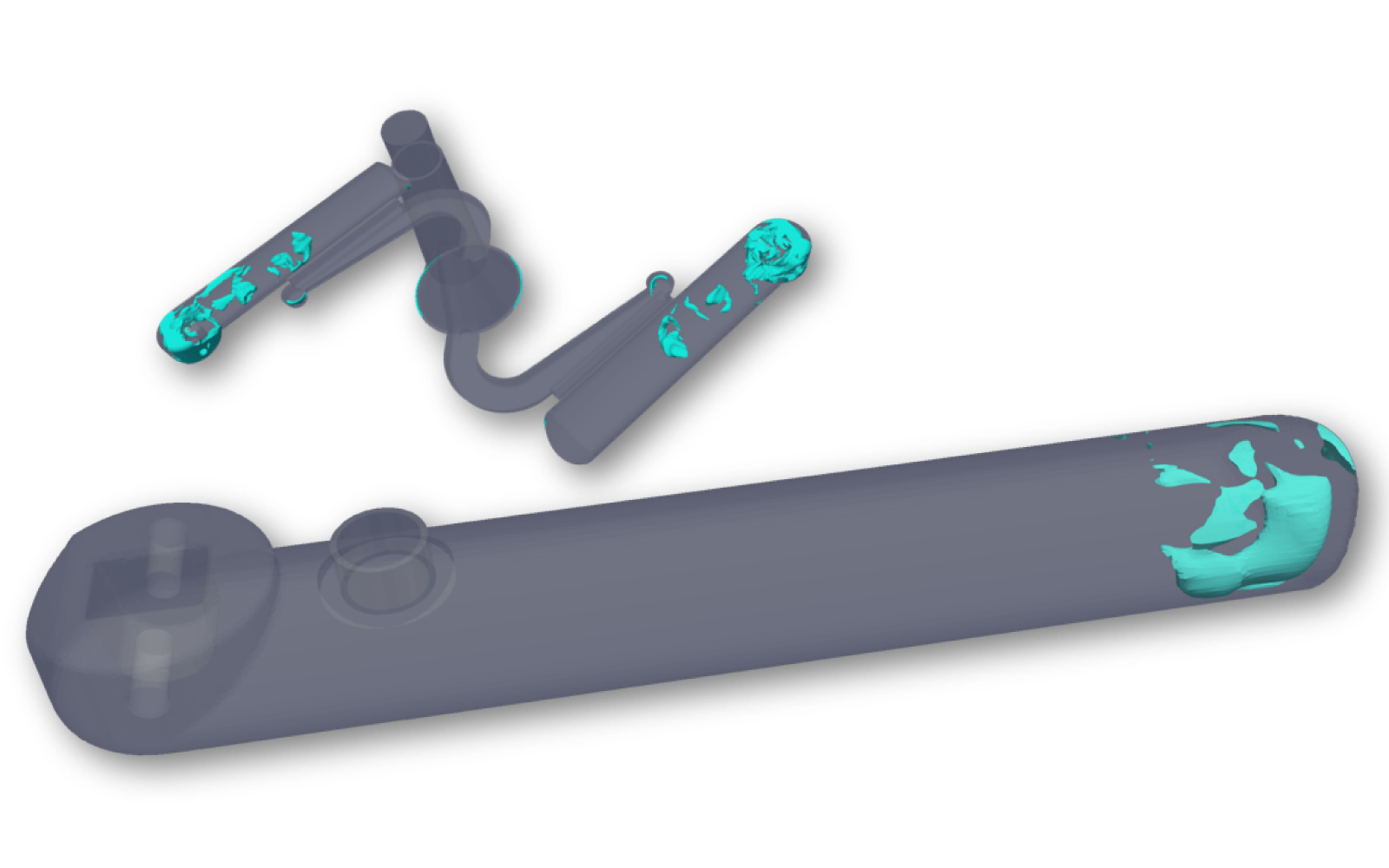 Another limit of many simulation software is the capability to simulate multiple injection points.
With Hot Runner, you can provide several injection points directly on the part, which represents a huge challenge for many simulation software. Some software is able to simulate such a complex flow if set up manually first. PiQ2 is working on embedding this function into the software so that it is automated.

In addition, unlike traditional die casting, since the Hot Runner injects the filling fluids from different entry points, the fluid dynamics become much more complex and challenging for the simulation modelling.

For decades an adequate Hot Runner system was an utopia for many die-casting experts. Thanks to Ferrofacta’s Hot Runner, now foundries have access to new possibilities and expand their business to new markets, becoming, for example, cost- and eco-friendly alternatives to plastic parts in disposable products.

Aware of the fact that the traditional simulation setup doesn’t entirely suit the Hot Runner Technology, PiQ2 is already working on analysing this technology and implementing a dedicated module, thus allowing foundries to have the tools to get the best out of this revolutionary system.
Please follow our LinkedIn profile to keep you up to date with the release of the new version of the Castle suite.