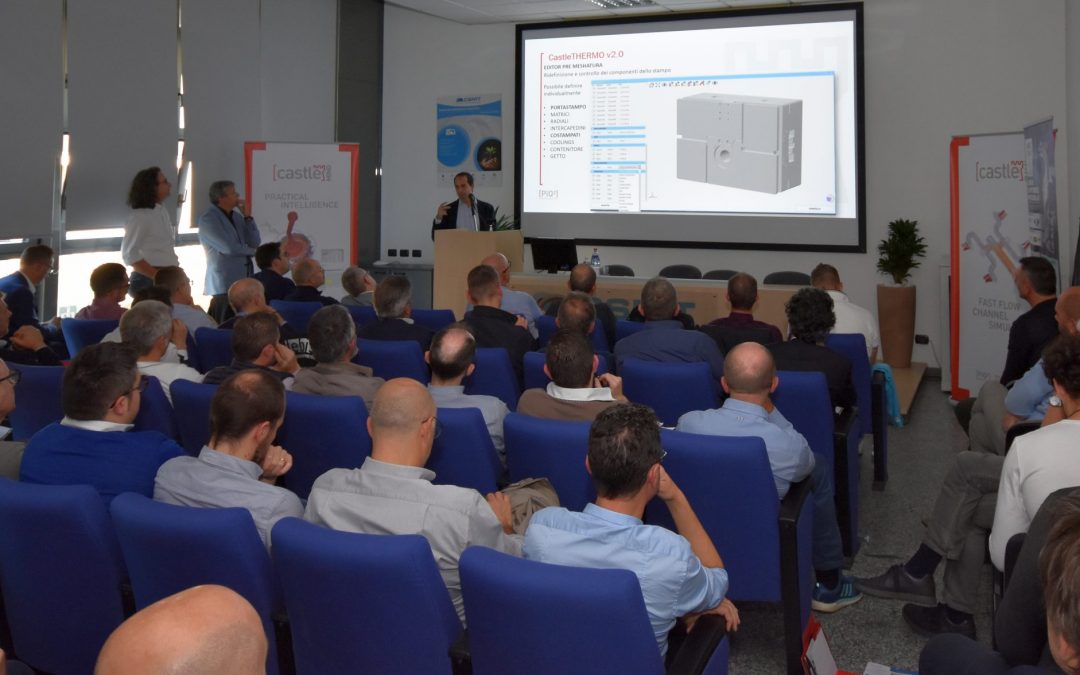 On October 16th the annual Meeting organized by Piq2 took place in a very crowded CSMT event room. More than 100 participants were able to appreciate the technical presentations brought by Piq2 and by guest companies.

Franck Gigez of Fondarex SA had the honor of opening the event with a presentation about the use of the vacuum for process optimization. Among the various projects presented, an interesting case study of optimization of the air evacuation system by means of simulation applied to a structural component (BMW-RollsRoyce) intended for heat treatment T7.

To follow, Claudio Gislon (R&D CostampGroup) presented the highlights of a research and development activity underway at Costamp HPDC in Sirone as part of a research project funded by the European community on the Horizon 2020 call. Using an mold with different types of sensors, a field test campaign was conducted to try to better understand and quantify some phenomena that occur during the process: from the deformation of the mold, to the dynamics of heat exchanges and to the effect of process parameters on quality casting, without neglecting the behavior of the air during the injection.

The new release of the CastleThermo V2.0 module was then presented, completely renewed both in the interface and in the meshing and calculation engine in order to make simulation of the thermal behavior of the mold increasingly simple and accurate to provide designers with a practical tool for the correct sizing and design of thermoregulation circuits. The exclusive fluid dynamics simulation of the circulation of the heat transfer fluid inside of cooling channels offers a very high level of accuracy of the results by virtually replicating what happens in reality. This makes it possible to predict the behavior and effectively design advanced thermoregulation systems such as jet coolers, timed and time-adjustable cooling systems. A preview of the future release of Castle v3.1 was also presented, which will be released next year, as well as the future CastleVision viewer under development.

Franco Pollio and Luca Metelli of Gefond showed the implementation of a waterfree microspray lubrication system on a mold operating at the Costampress foundry, highlighting the considerable advantages found both in terms of casting quality, reducing cycle time and for the reduction of environmental management costs. This job was developed, as explained later by Paolo Bonvicini, by 4 hands with Frigel-Greenbox in order to optimize the thermoregulation through the use of a synchro thermoregulator regulated with the injection that operates in heat removal according to a dedicated time / flow rates scheme  ensuring optimal temperature distribution and consistency also with significantly reducing energy costs. In this case, the simulations carried out by Piq2 with CastleThermo allowed to optimize the parameters (temperatures, flow rates, channels) of the thermoregulation cycle to avoid the lack of heat removal by the lubrication phase.

At the end, an interview by Piq2 that showed the use of the CastleRun module for fast simulation of the runners, giving indications on the effect of the shape of channels and diffusers on the efficiency of the power supply system. The case studies dealt with provided practical guidelines on how to approach the design of the runners and how to modify them in order to give an optimal flow to the liquid metal.

As in past editions, the topics discussed gave rise to discussion and discussion during the coffee break and offered development ideas for possible implementations in future software releases.